In some cases, we need to manage the states inside a component, or even a global state to let our page render corresponding contents for users. NGRX uses store to save a current state, and component can get this live state via observeable variables(from Rxjs. In this way, the store isolate the state from the script of component. The NGRX doc is here.

Traditionally, we can use a variable as a member inside our component script and make this as a state flag, our code will review this variable and change their state during life cycle. But, to use NGRX can bring such advantages in my opinion:

To make our code more elegant and replaceable, we can use facade pattern based on a module.facade.ts , which will provide easy interfaces for components’ script to control our store.

A store is a ‘holder’ for current state, in our pattern we can use DI to get this store by us DI, and implement store in app.facade.ts.

In our cases, our facade class will interact with selector and action, compared with the official image in follow. 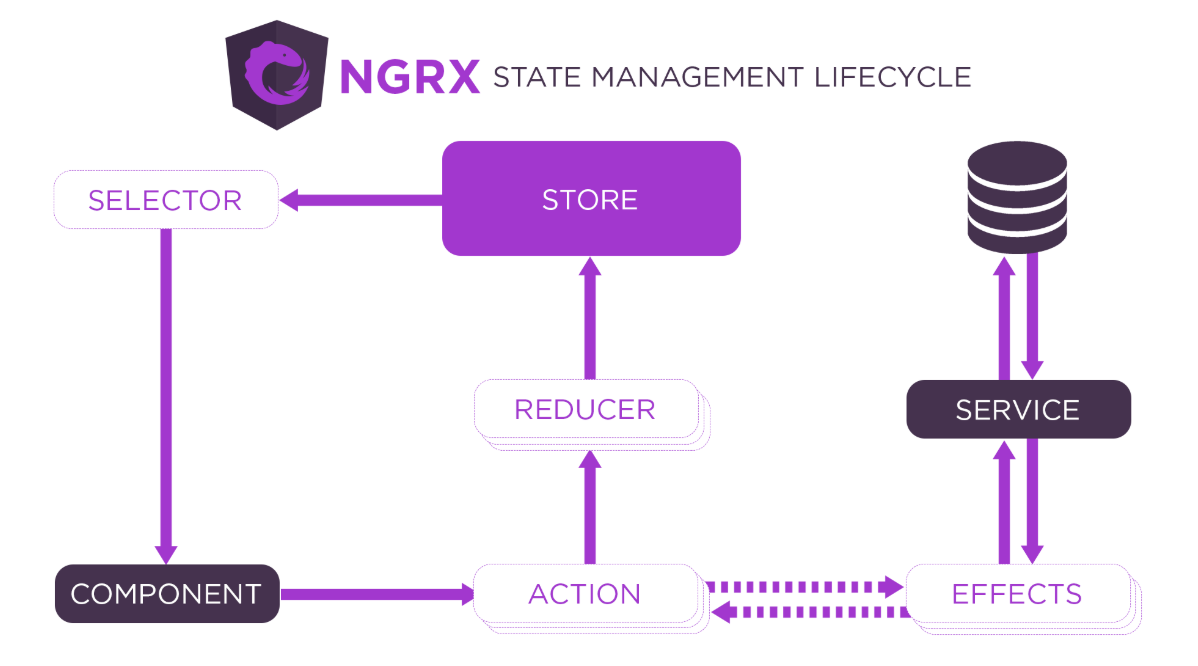 NGRX: Logic is your code.

Suppose we have a component showing a counter’s value, it can call facade for 4 operations:

The first step is to define actions, which is the type of message our facade will dispatch, and the same message that will be caught by reducer and effect.

Here we export 3 types of action, via given method createAction from ngrx, we can add a string as the comment as a attribution in this method.

Also we declare the format of state as AppState:

Notice that the action is just the ‘Message Carrier’, and reducer plays the role maintains the states:

Now the state was save in to store. here we only have one : initialState.counter = 0

Selector: Provided a pipe from store, and provided public query method to let other class get sync state.

Effect: Capture action dispatched, and do other things, like call api to send http request, or dispatch other action.

First let us review what state we have:

To set a state, component script need to call facade’s method, and the latter will dispatch a action:

And reducer will capture it and change store’s state :

Get State from facade

Get observable variable from state via selector:

In our procedure, we are actually using async observable variables to link all the ‘observable chain’.